Most currencies didn’t do well against the last year, but few did worse than the British pound. At the start of 2022, was hovering above 1.3530. Alas, high inflation coupled with Liz Truss’ short-lived cabinet’s economic illiteracy pushed the pair to an all-time low of 1.0360. Fortunately, when things are that bad, the only way is often up.

GBP/USD closed the first week of 2023 in the vicinity of 1.2100, up 16.7% from its September low. In addition, the UK seems to have reached a plateau while already dropping in the Eurozone and the US. All this bodes well for the pound. However, it is quite challenging to base trading decisions on macroeconomic factors. That’s why we prefer using Elliott Wave analysis. 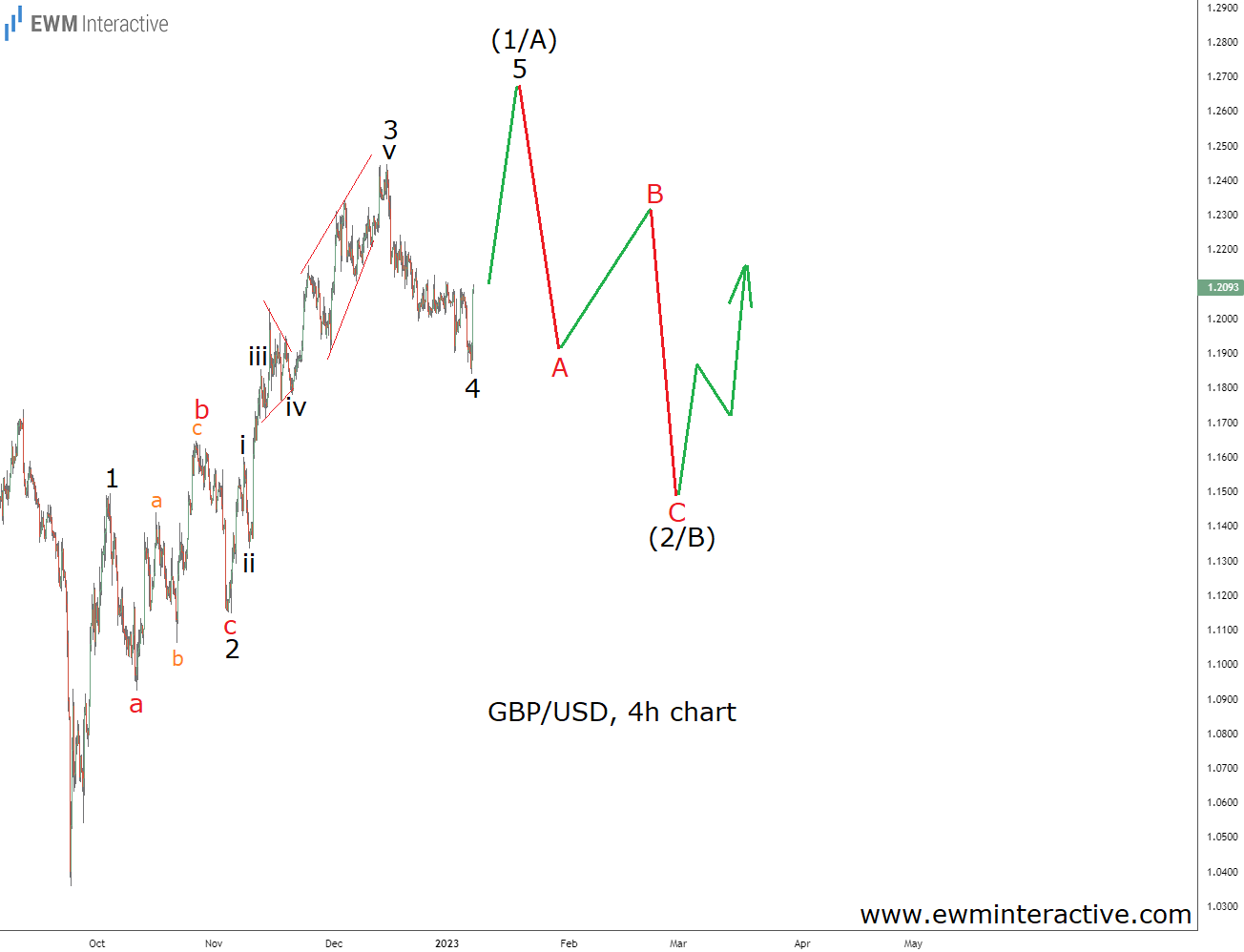 The 4-hour chart of GBP/USD reveals the structure of the pair’s recovery from 1.0360. It looks like an almost complete five-wave impulse pattern. Waves 1-through-4 are already in place, whereas wave 2 is a flat-running correction. Wave 3 is extended, and its five sub-waves are labeled i-ii-iii-iv-v, where wave ‘v’ is an ending diagonal. The guideline of alternation has been taken into account since wave 4, in contrast to the sideways movement of wave 2, is a sharp pullback.

This brings us to the fifth and final wave, which is still missing. Wave 5 is supposed to exceed the top of wave 3, so if this count is correct, we can expect GBP/USD to reach 1.2600-1.2700. Unfortunately for the bulls, a three-wave correction follows every impulse. This means that instead of joining the buyers in that area, traders should prepare for a notable decline back to ~1.1500.

Once there, the 5-3 Elliott Wave cycle would be complete, and the uptrend would resume in wave (3/C). Judging by the chart above, 2023 is looking a lot better for GBP/USD. As long as the pair trades above 1.0360, higher levels can be expected in the long run.

AUD/USD kisses 0.7100 for the first time in five months as Australian Inflation

GBP/USD spikes and retreats post-BoE, back around 1.2300 ahead of…

US labor market seen cooling, but not nearly enough for…

Here is What You Should Know

Wells Fargo Hoped Fed Sanction Would Be Brief. Today It…

Can A Trillion Dollar Coin Resolve the Debt Ceiling Crisis?