The current USDCAD timeframe shows the internal structure of a large correction pattern, which most likely takes the form of a cycle triple zigzag w-x-y-x-z.

Perhaps the first four parts are fully completed, and now the final actionary leg is being built – the sub-wave z. Apparently, the wave z takes the form of a primary double zigzag Ⓦ-Ⓧ-Ⓨ, where the sub-waves Ⓦ-Ⓧ have already been formed.

Thus, the last actionary primary wave Ⓨ may be under construction at the moment.

According to an alternative scenario, the formation of a cycle triple zigzag could be completed. Therefore, let’s assume that the initial part of a new bearish trend is forming. We assume the construction of an intermediate impulse (1)-(2)-(3)-(4)-(5). 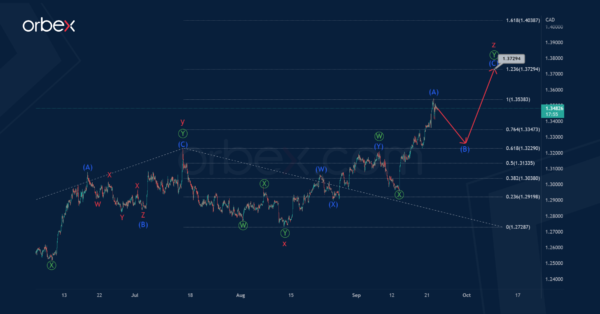 It is possible that the impulse (1) and bullish correction (2) have been fully completed today, and now we see a decline in the wave (3).

The target for bears is at the level of 1.295. This is the previous minimum, marked by the primary intervening wave Ⓧ. After reaching this level, a small corrective rise is expected within the bullish correction (4).

An approximate scheme of possible future movement is shown on the chart. 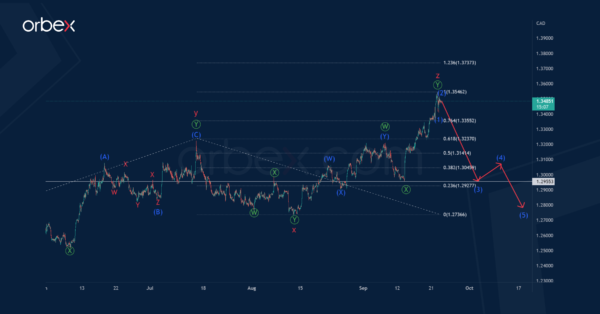 The continuation of the uptrend could lose momentum – UOB

USD/CAD seesaws around 1.2850 ahead of US/Canada jobs data

Canadian Dollar “Could be King” says Bank of Montreal