7 Investments for the FatFIRE Movement


Two years ago, I wrote about buying on the dip as an investment strategy for those in the FIRE movement. FIRE stands for Financial Independence, Retire Early, and involves a commitment to both cutting your daily expenses and an accelerated investment strategy. Today, FatFIRE is the “in” retirement concept.

FatFIRE takes things a step further. Devotees to this new movement want to be able to “retire with a fat stash” that allows them to live on around $100,000 a year. According to Fortune, FatFIRE split off from FIRE in 2016 when a Reddit user decided cutting his expenses to the bone wasn’t his idea of a good time.

And so the subreddit r/fatFIRE was born. Today, it has more than 330,000 members. The downside of FatFIRE is that it’s incredibly unrealistic. Very few people have the skillset to pull it off. Financial planner Dana Menard puts it at around a tenth of the population.

If you believe you’re in this cohort, though, here are seven investments to help you with your FatFIRE dreams.

The Novel Investor has a 15-year chart that shows the annual performance of all 11 sectors in the S&P 500. The first thing I noticed is that the index’s consumer discretionary stocks were in the top three sectors based on annual returns on eight occasions. That’s the best showing of all 11 sectors.

So, if you don’t want to lose your shirt betting on consumer trends — Peloton Interactive (NASDAQ:PTON) and Wayfair (NYSE:W) come to mind — take the safer route and bet on the entire sector.

I selected Fidelity MSCI Consumer Discretionary Index ETF (NYSEARCA:FDIS) because it has a low expense ratio of 0.08%, 2 basis points less than Vanguard and State Street’s versions.

FDIS tracks the performance of the MSCI USA IMI Consumer Discretionary Index, a collection of companies that reflects the consumer discretionary sector in the U.S. The cap-weighted ETF has 330 holdings. The top 10 account for 63% of the $1.1 billion in total assets.

I’d own all 10. However, note that Amazon (NASDAQ:AMZN) and Tesla (NASDAQ:TSLA) account for almost 40% of the ETF’s assets. I like both companies, but if you don’t, you may want to pass on putting this ETF in your FatFIRE portfolio. 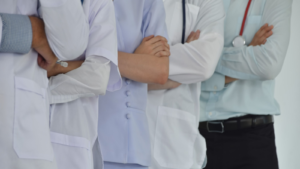 After consumer discretionary, healthcare was the sector with the most years out of the past 15 as a top performer, according to Novel Investor. With the U.S. population getting older and life expectancy increasing, demand for healthcare will continue to rise. The need for healthcare is never going away. It’s that simple.

As for the top three holdings, you’ve got UnitedHealth Group (NYSE:UNH) at 8.9%, Johnson & Johnson (NYSE:JNJ) at 7.8%, and Pfizer (NYSE:PFE) at 4.6%. Is it a coincidence that two of those names developed Covid-19 vaccines? I don’t think so.

Over the past 10 years, VHT has had an average annualized total return of 14.3%.

The SPDR NYSE Technology ETF (NYSEARCA:XNTK) from State Street tracks the performance of the NYSE Technology Index, an equal-weighted index composed of 35 of the leading U.S.-listed technology-related companies.

I’m a big fan of equal-weighted ETFs because they don’t rely too much on one or two stocks like FDIS above does. A few bad years by both Tesla and Amazon and your hard-earned capital is dead money.

The weighted average market cap of the companies held by the ETF is $392 billion, so it’s very large-cap in nature. The top three industries are semiconductors (24%), internet and direct marketing retail (9.8%) and systems software (9.5%).

Does Altus Power Inc (AMPS) Have What it Takes to be in Your Portfolio Friday?

7 Semiconductor Stocks to Buy Before the Bull Market Returns

Japan to provide support to utilities for LNG procurement…

Banks go to the mattresses

U.S. economic growth revised up; gap between GDP and GDI…

The Global Cloud Native Storage Market size is expected to…