The New Zealand Dollar gained against its major counterparts as the Reserve Bank of New Zealand raised benchmark lending rates to 1.00% from 0.75% prior, as expected. Heading into the monetary policy announcement, the markets were already anticipating an aggressive approach from the central bank. Overnight index swaps (OIS) were pricing in at least 7 hikes by November. It seems that the central bank did not let traders down.

What is interesting is that compared to where the central bank expects rates to be by the end of 2022 (2.22% average OCR), it was not as aggressive as what OIS was pricing in (2.6%). However, the central bank did not rule out bigger increments of tightening lending rates if necessary. Coupled with plans to reduce bond holdings, this was interpreted as a hawkish hike.

Where to now for the New Zealand Dollar? Following the interest decision, RBNZ Governor Adrian Orr will be hosting a press conference at 1:00 GMT on February 23rd. There, he may reiterate much of what was reported by the central bank. That may open the door for the Kiwi Dollar to extend its push higher on the rate announcement.

However, everything is not necessarily in the clear, especially against the US Dollar. Geopolitical tensions are still simmering around Ukraine, where all eyes are now on Russia after a round of sanctions from western nations. Further aggression risks bringing more volatility into markets, leaving the sentiment-linked NZD vulnerable. Fading tensions on the other hand could continue fueling carry trade NZD inflows.

On Friday, Core PCE, which is the Federal Reserve’s preferred gauge of inflation, is expected to cross the wires. Prices are expected to rise 5.2% y/y in January, up from 4.9% in December. That would be near a 40-year high. If that continues to fuel a more hawkish Fed and boost market volatility, then the Kiwi Dollar risks giving up gains against the US Dollar. 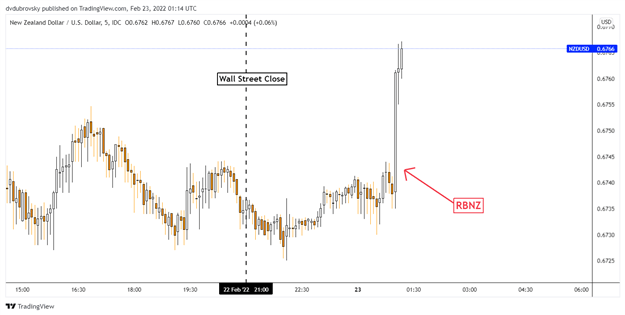 NZD/USD is aiming to confirm a breakout above a descending trendline from November. That may open the door to extending gains towards highs from January. The latter would make for a key zone of resistance between 0.6859 and 0.6891. Getting there entails clearing the 100-day Simple Moving Average (SMA), which may reinstate a downward bias. Immediate support appears to be the 0.6702 inflection point. 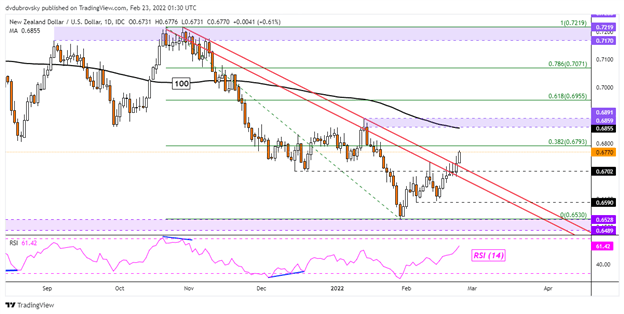 Receive timely and compelling market commentary from the DailyFX team

Implications for AUD/JPY and EUR/JPY Rates

Recovers but stills under the 200-DMA

Kiwi’s path of the least resistance is lower

Deutsche Bank remain bullish on the Australian vs. New Zealand…