The New Zealand Dollar remained among the top performing major currencies when rallying past a new technical milestone on the charts this week and could have further to rise in the short-term, although some analysts are also conscious that the risk of downward correction is also rising too.

New Zealand’s Dollar was outpaced by its Australian and Norwegian counterparts during the week to Friday but otherwise rose against all major currencies in a rally that eroded two important levels of technical resistance on the charts.

NZD/USD had reversed more than half of its decline from June 2021 after breaking emphatically above 0.6923 and the 50% Fibonacci retracement of the aforementioned downtrend on Monday, before going on to also surpass another smaller technical milestone at 0.6956.

“The next upside target remains 0.7000. Commodity prices have risen further and remain a powerful source of support for the NZD. Longer term, we target 0.7100+ by June,” says Imre Speizer, head of NZ strategy at Westpac. 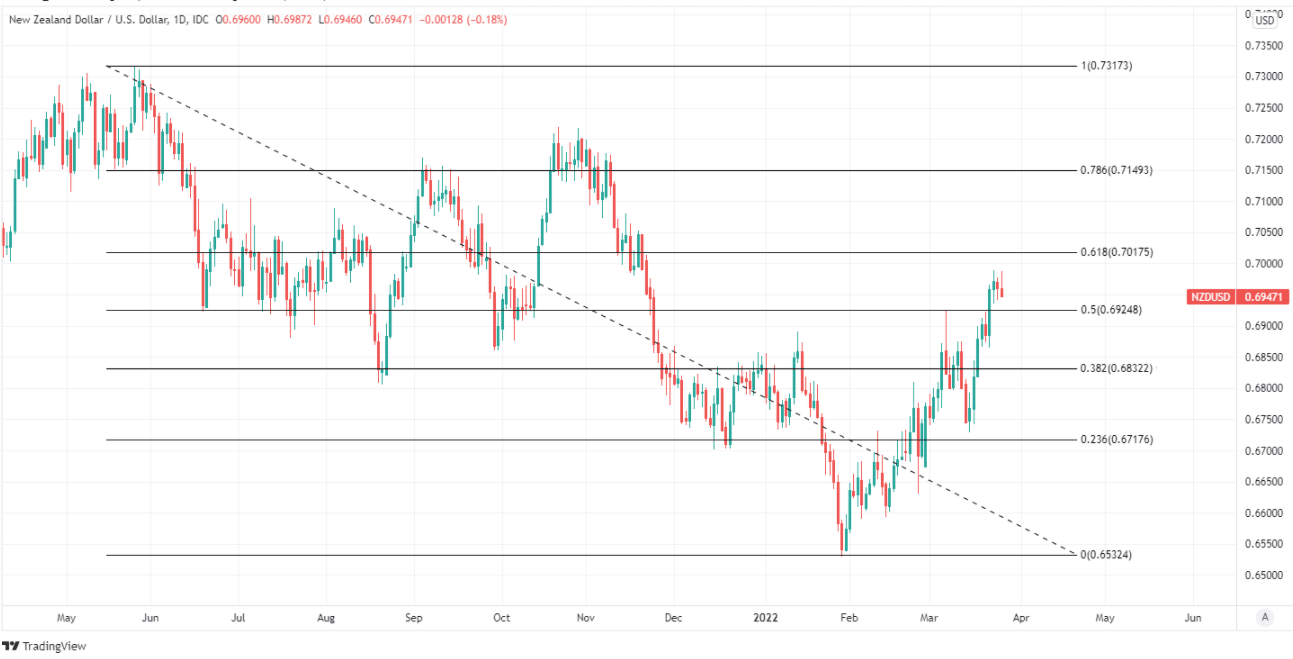 The New Zealand Dollar had already been rallying strongly before U.S. exchange rates eased lower throughout much of this week, which provided an added tailwind to NZD/USD as the main Kiwi exchange rate also continued to benefit from gains in agricultural commodity prices.

Many agricultural commodity prices have risen strongly due to the Russian invasion of Ukraine and other pre-existing factors while the Kiwi Dollar is also widely perceived as having benefited from the Reserve Bank of New Zealand’s (RBNZ) interest rate policy.

The RBNZ indicated in February that it will likely have to lift its interest rate even further than was previously envisaged if it’s to put a lid on domestic inflation pressures during the year or more ahead, leading many economists to lift forecasts for the official cash rate.

However, some local analysts have expressed reservations about the outlook for the New Zealand economy and are conscious that despite this week’s correction lower, there is still a risk of the U.S. Dollar rising further in the short-term.

“The NZD outlook is clouded thanks to myriad crosscurrents (housing slowdown and hard landing risks vs higher rates and commodities). But when we think of the inflation backdrop, all roads seem to lead to potentially much higher real rates (especially in the US, where inflation is the highest),” says David Croy, a strategist at ANZ.

“If the late 70s/early 80s gives us any lead, it is that the USD rally (which began in earnest about 9 months ago) may have more legs,” Croy and colleagues cautioned in a Friday research note.

This is particularly relevant for the New Zealand Dollar following its recent outperformance and given that it often features among the most sensitive to changes in U.S. bond yields brought about by Federal Reserve monetary policy. 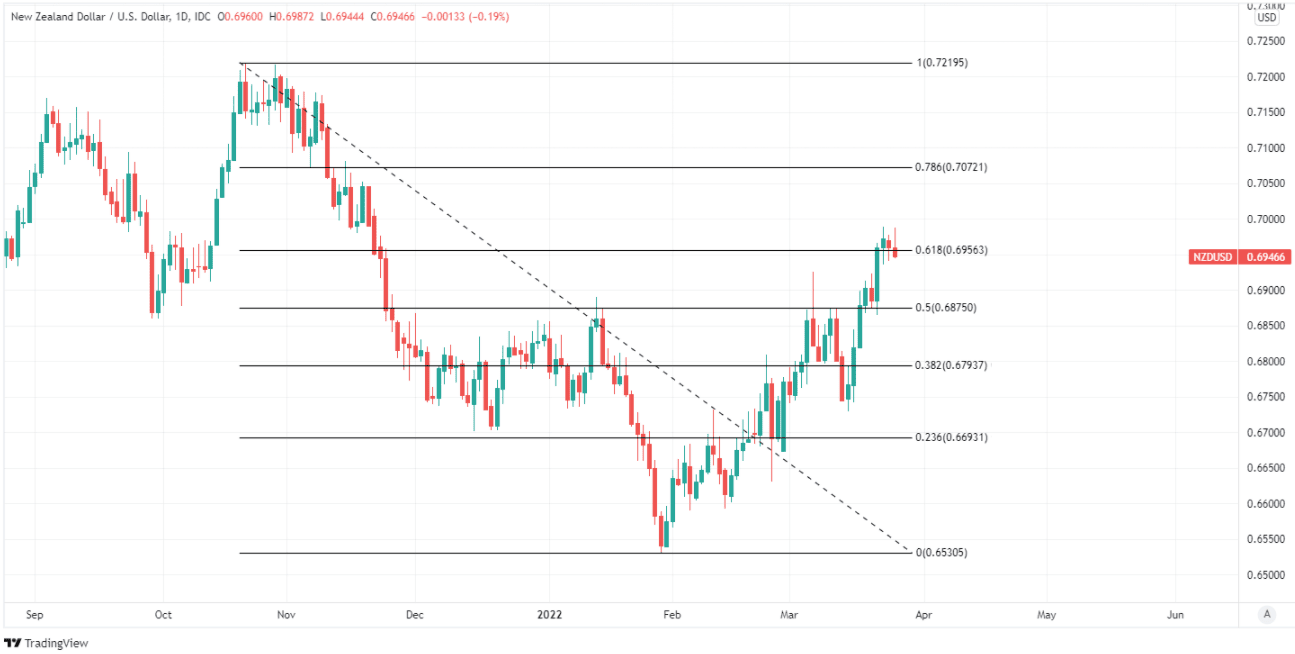 “Markets may find the current levels as relatively attractive to build back some defensive long-USD positions, mostly against European currencies.

We also think that a market that is inching closer to pricing in 100bp of rate hikes by the Federal Reserve at the next two meetings may favour the dollar,” says Chris Turner, global head of markets and regional head of research for UK & CEE at ING.

“The two [antipodean] currencies continue to benefit from being geographically far from Ukraine’s conflict while benefiting from higher global commodity prices,” Turner and colleagues said on Friday.

The U.S. Dollar was heavily favoured among speculative traders during the nine months to March and it’s possible, if not likely, that this week’s declines were induced by profit-taking within that corner of the market.

It remains to be seen if recent weakness in the U.S. Dollar marks the beginning of a trend change, however, and especially after this week’s remarks from Chairman Jerome Powell and other policymakers.

Deutsche Bank remain bullish on the Australian vs. New Zealand…