Amidst a brewing reverse currency war analysts like “Dave the Wave” advised traders to accumulate Bitcoin, in its buying zone. Analysts continue to retain a bullish outlook on the asset.

While currency wars flare up during tumultuous economic times, they have a significant impact on Bitcoin’s price trend. BTC and cryptocurrencies are riskier assets and investors have typically pulled out capital from such investments amidst economic uncertainty.

Despite investors sentiment has worsened, there is a sustained demand for Bitcoin among traders. Ebrahim Rahbari, Citi strategist, believes that over tightening around the world is a deeply disturbing prospect for global markets and “reverse currency wars are strongly bearish for risk assets.”

Even if central banks tighten monetary policy further, the situation will not worsen more, for the current performance of crypto assets is terrible enough.

An analyst who predicted the May 2021 decline in Bitcoin price believes BTC is in the buying zone and it is the ideal time to buy the asset.

Analyst argues Bitcoin is in the buying zone

Dave the Wave, a leading crypto educator and analyst had accurately predicted the May 2021 crash of Bitcoin. Dave told his 123,600 Twitter followers that Bitcoin is in an extended sideways range and it is in the “buying zone.”

The monthly MACD did wonders for predicting the top [loss of momentum/ blue arrow]. Histogram is now as over-extended as previously… and on a similar time-range. Bullish [for optimal buying as opposed to buying the top].

Bitcoin price is ready to break out of its downtrend

El Crypto Prof, a pseudonymous crypto analyst, noted that at the last FOMC-meeting Bitcoin broke out of its month-long descending broadening wedge-pattern. Therefore, it is likely that the asset continues its uptrend, a copy of the DBW strategy.

The analyst believes Bitcoin price is ready to hit the $23,550 target if the pattern repeats itself. 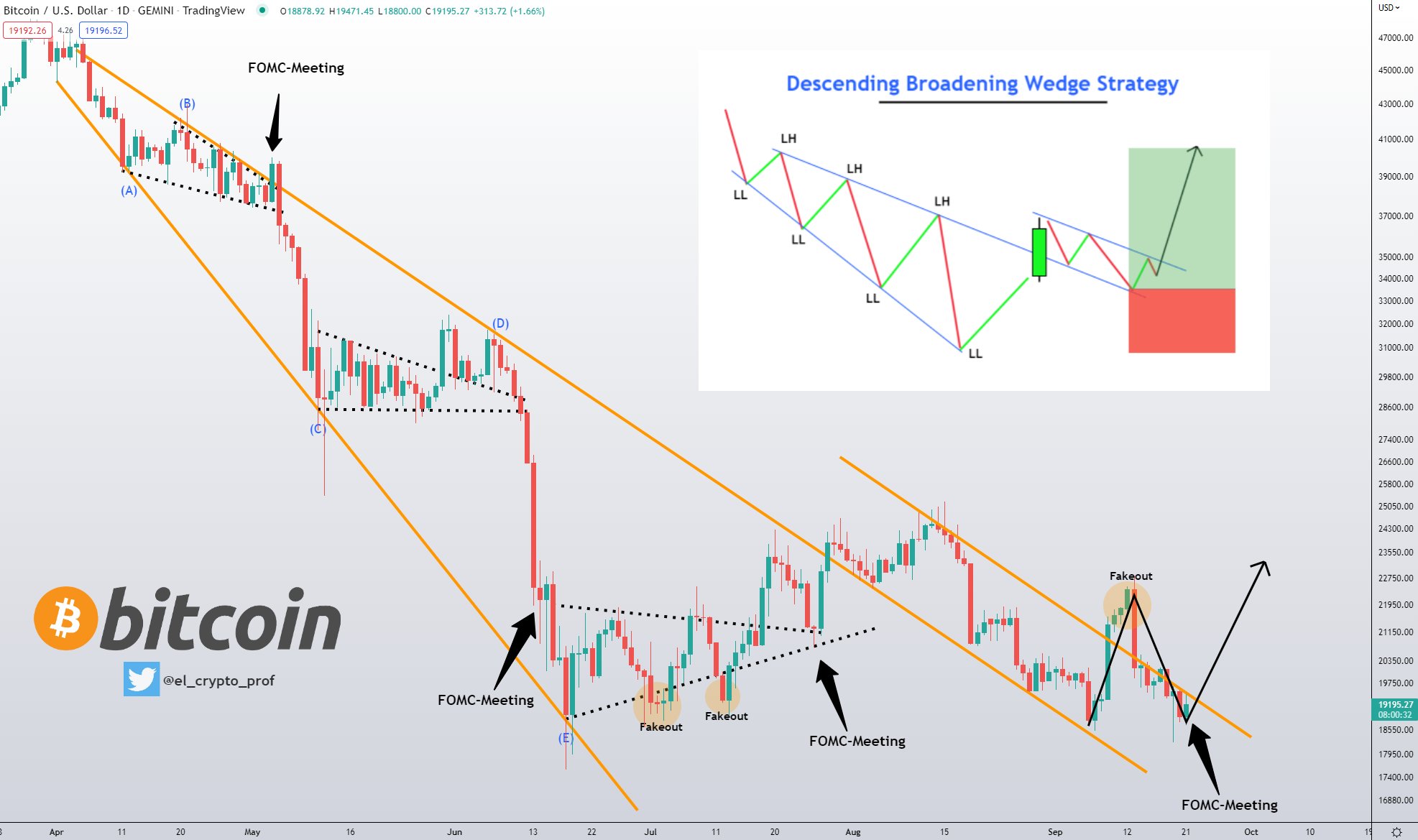 Ethereum Price Dislocates From Bitcoin Ahead Of The Merge (ETH-USD)

Was it Nord Stream that caused Bitcoin to collapse?

Bitcoin price skirts $19.3K amid fear over ‘mother of all…

Bitcoin Could ‘Double in Price’ Under CFTC Regulation, Chairman…

Bitcoin Price Prediction as US Income and Spending Data Is…

Shiba Inu Price Prediction – SHIB Down 4.5% How Low Can It Go?

MANA Price Gets 2.5% Weekly Boost As Bulls Charge For Reversal

Data: Most Bitcoin Mining Firms Have Lost Money Over The Years