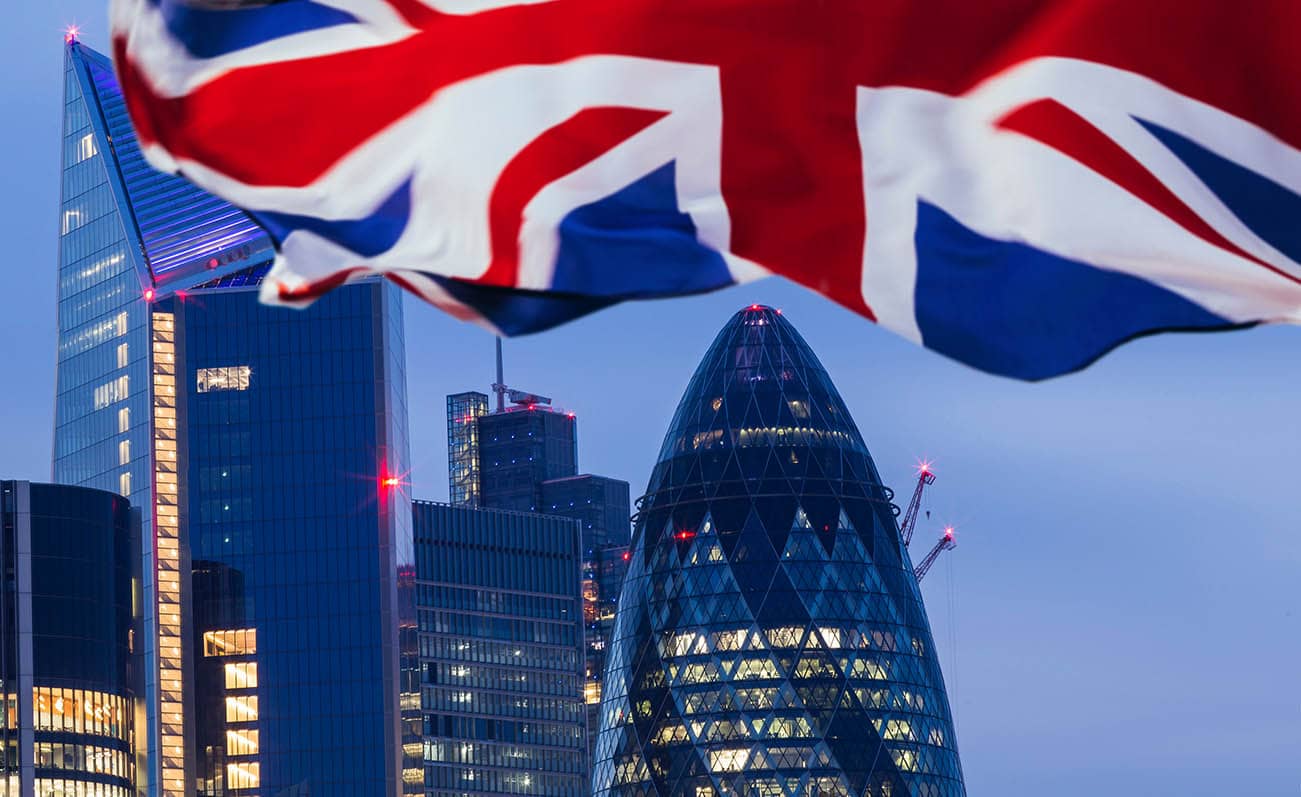 The British Pound could be better supported over the near-term courtesy of a strong economic growth report published this week which increases the odds for a 50 basis point rate hike at the Bank of England in August.

Potentially more significant, the data sends a message to a market that has become increasingly bearish on Sterling and the UK economy in recent months and any sentiment shift could bolster demand for the currency.

UK GDP printed 0.5% in the month to May said the ONS, beating expectations for growth of 0.1% and a return to growth having posted -0.2% in April.

In the three months to May the economy grew 0.4% which bettered a consensus forecast of 0%.

The data beat highlights how negative investor and analyst sentiment to the UK has become of late, which analysts say has contributed to Pound Sterling underperformance over the course of 2022.

“May GDP and revisions to past data lifted the Q2 carryover from -0.4pp to +0.2pp and painted a much more comforting picture of the economy than feared after the April print,” says Fabrice Montagné, economist at Barclays.

Disrupting the vortex of negative economic sentiment amongst analysts and investors could assist the Pound in reversing some its recent weakness, particularly against the likes of the Euro.

“The news will help ease some of the concerns about the health of the UK economy… Sterling jumped from $1.1895 to $1.1936 on the news as the markets priced in an increased probability of a 50-basis point hike from the Bank of England,” says Marc Cogliatti, Principal in the Global Capital Markets team at Validus Risk Management.

The Pound to Euro exchange rate went as high as 1.1870 in the wake of the GDP release but has somewhat pared the gain to 1.1816, but the lows of 1.1586 reached in mid-June look safe as Sterling breaks out of a short-term downtrend. 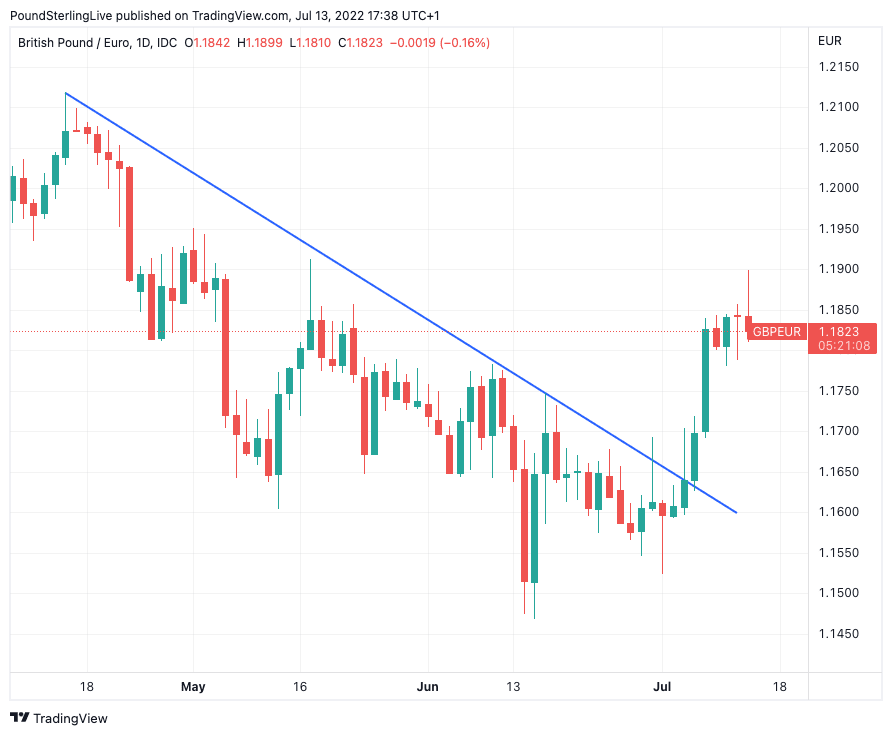 The Pound to Dollar exchange rate went as high as 1.1966, but the charts confirm this is a mere blip in the face of the Dollar onslaught and there is no technical evidence available to suggest the trend is turning: 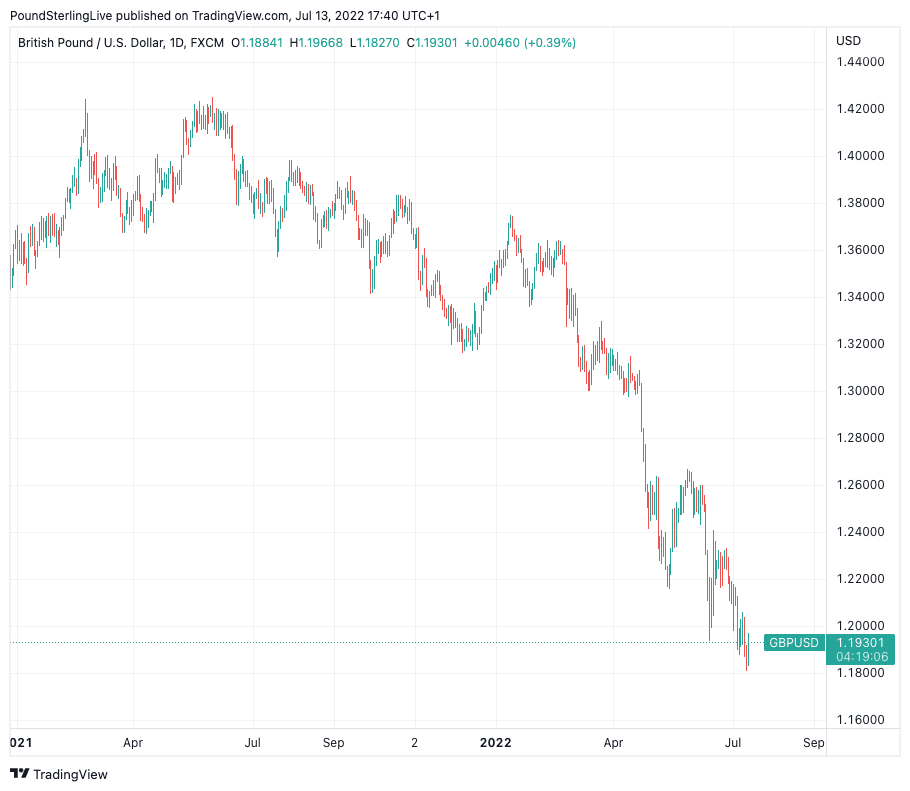 Above: Daily GBP/USD chart showing a long-term downtrend that ultimately remains in place.

“It’s hard to be too bullish on sterling in the short term although longer- term, we remain optimistic given the pound is now significantly undervalued on a purchasing power parity metric,” says Cogliatti.

In the wake of the surprising GDP data Barclays says it is revising up its second quarter UK GDP forecast to -0.2% quarter-on-quarter.

“This contrasts with softer data so far and feeds into the BoE’s “forceful” narrative,” says Montagné.

The “forceful narrative” is a reference to the Bank of England’s message in its June policy meeting that it stood ready to take a more robust approach to combating inflation.

This was widely read by markets as a hint by the Bank it was prepared to break a preferred convention of hiking rates in 25 basis point increments and opt for a 50 bp hike.

Foreign exchange markets have held this to be a broadly supportive development for the Pound, and this is reflected in a better supported UK currency against most majors, apart from the U.S. Dollar.

The Pound failed to garner support when the market believed the Bank of England was hiking into slowing growth.

The magic ingredient for a stronger Pound therefore is, as always, economic growth; something the UK economy continues to offer despite fears of a rapid slowdown.

“The strength in May was fairly broad-based, with positive growth in services, production and construction,” says economist Steffan Ball at Goldman Sachs.

“Folding in both the back revisions and the surprising jump in activity in May boosts our estimate of Q2 GDP growth from -0.7% to +0.3%,” says Ball.

Goldman Sachs assumes some of the positive momentum will continue into the coming months, which leads them to expect third quarter GDP to increase by +0.4% (vs +0.1% previously).

“Given we no longer estimate Q2 growth to be negative, we are lowering our recession probability for the year ahead to 35% (from 45% previously),” says Balls.

This is now just slightly higher than in the U.S. where odds of a recession sit at 30%.

Bank-beating exchange rates, get up to 5.0% more currency when you transfer with Horizon Currency. Get a free quote here.

But the odds are lower than in the Eurozone where Goldman Sachs’ economists price odds of a recession at 50%.

Pound Drops Most in a Month

EUR to GBP Outlook Ahead of Key Speeches

EUR/GBP remains on the defensive, holds above two-and-half-week…

FX Daily: Cheaper gasoline should help US confidence and the…