The Japanese Yen is quickly weakening after this month’s Bank of Japan monetary policy announcement, fading as much as 1%. More attention than usual has been placed on the BoJ due to a combination of rising inflationary pressures, a rapidly falling currency and market conditions that have been pushing government bond yields higher across the world. 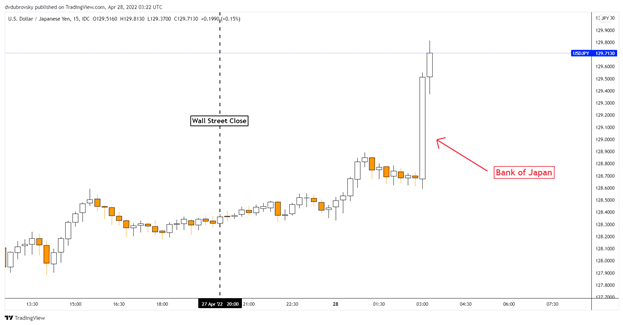 Bank of Japan Takeaways, Where to for USD/JPY?

So, what was the main takeaway from the announcement? Long story short, the central bank doubled down defending the 10-year bond yield target at 0.25%. The BoJ said that it will continue purchasing those to a necessary amount, with no upper limit, every single business day. This is despite the central bank raising fiscal-2022 core inflation estimates to 1.9% from 1.1% before.

This is a dovish hold scenario where despite rising price pressures, the central bank is sticking to its ultra-lose policy prescription for the economy. As estimated in my second-quarter Japanese Yen fundamental forecast, Japanese headline CPI may cross the 2% central bank target towards the halfway point of this year. In fact, the model I prepared was quite close at predicting the recent March CPI print.

So where does this leave the Japanese Yen? Both government officials and central bankers have been making comments about the exchange rate. But, based on what happened today, it seems that the latter is focusing on supporting the economy. With that in mind, for the anti-risk currency to meaningfully appreciate, it would likely have to come from further deterioration in global risk appetite.

This could come from a key US economic data print later this week. On Friday, the Federal Reserve’s preferred inflation gauge will cross the wires. The PCE core deflator is expected at 5.3% y/y in March, down from 5.4% in February. An upside surprise risks further reinforcing a hawkish Fed, pushing Treasury yields higher, and perhaps sinking equities to the benefit of JPY.

On the daily chart, traders will be watching if USD/JPY can maintain a break above the April 20th high at 129.40. Confirming the breakout could open the door to extending gains. In that case, immediate resistance appears to be the 38.2% Fibonacci extension at 130.04.

Still, negative RSI divergence does show that upside momentum is fading, which can at times precede a turn lower. In the event of a turn lower, keep a close eye on the rising trendline from March as well as the 20-day Simple Moving Average. These could hold as support, maintaining an upside focus. 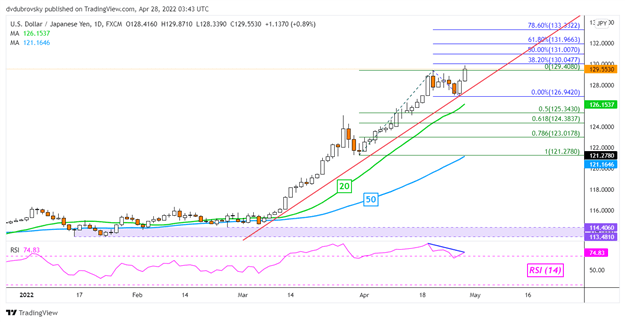 EURUSD ticks up to touch the 200 hour MA and then push lower.

The USD is moving higher in US trading. What are the key drivers…

USD/JPY recovering but faces resistance below 134.00

Buyers react to a bullish-doji in the daily chart

Markets turn choppy ahead of the weekend

Goldman Sachs says the probability of USD/JPY intervention has…